Following the introduction of the Motor Car Act 1903 on 14 August 1903, vehicles in the United Kingdom were mandated to use number plates on public roads. The number plates cost five shillings each, and applications can only be made for vehicles that were under 17 years old (14 years for motorcycles).

However, legislators and vehicle manufacturers consistently underestimated the appeal of private ownerships of motor vehicles, and as such, have had to revise the number plate formats six times over the last century to meet the ever growing demands. So what were the previous five formats before the current one?

The regional prefix system was the first number plate format to be introduced in UK. It’s a six character and a single space permutation consisting of two letters, demoting registration location, and four numbers, a random combination. As such, each registration location could conceivably accommodate up to 10,000 registrations – a pretty large number back in those days. Example: BC 3456.

Demand for automobiles and motorcycles began to increase, especially after World War II, so a new format was introduced to fulfil the anticipated new registrations. It was still a six character combination, but the regional prefix has been changed to three letters, while the random number combination has been reduced to three. Example: BCD 567

The surge in demand caught everyone by surprised, and the previous number plate format was almost exhausted after just one decade. The brilliant people in government then came up with a unique plan – flip the format. So everything remains the same, except the numbers come before the regional prefix. Example: 567 BCD 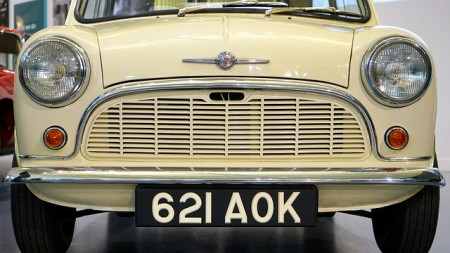 The number plate format underwent its most comprehensive revision in 1963 with the suffix system. It was a seven character and two space system which consisted of a year of production (first letter), a random three number sequence (between 1 and 999), and a three-letter local registration office tag. With over a million annual permutations, this format was bound to last forever (hint: it didn’t). Example: D 567 DEF

Similar to third revision, this format was a flip of the previous format. The only change is the year of registration tag has been shifted from the front to the back – everything else remained the same. Example: 567 DEF D

The current system devised by the DVLA is a much more complicated, and is projected to last until 2051. So, you needn’t have to worry about a new plate format anytime soon – unless you’re planning on buying a personalised number plate!